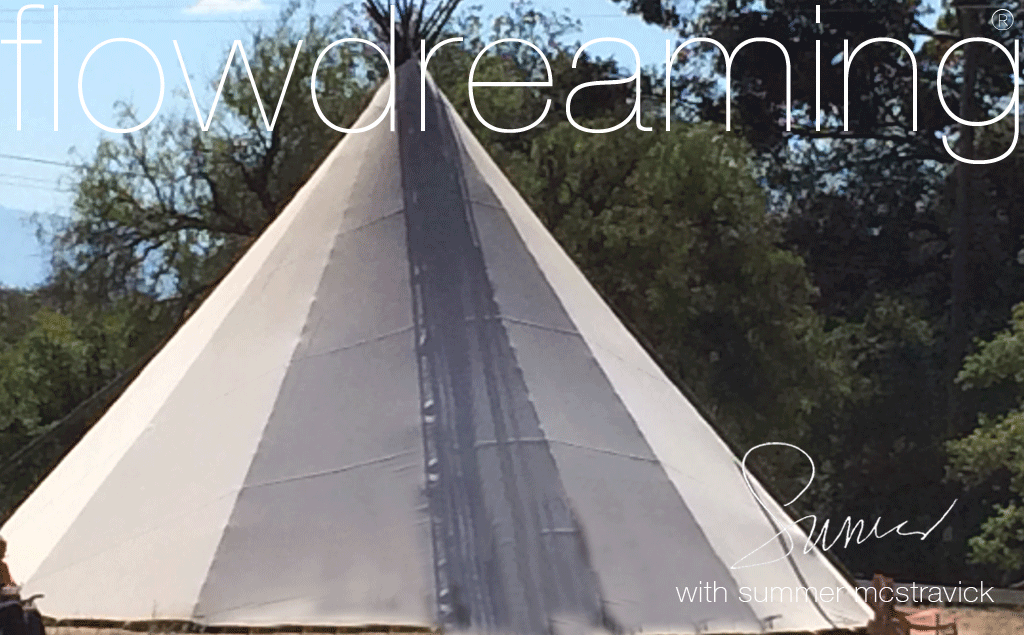 So here I am. The Navajo healers have come from 4 Corners. The medicine woman, who co-leads the ritual, had breast cancer once. She knows.

Inside the tent, we all share. Tell us what hurts. What pains you. What you regret. What you fear. Let’s lift that. We share the food that’s passed in corn husks, each taking a dab from them.

We share the drink, sipped from the same tin cup. We all feel your fear and grief, and we dilute it for you.

My turn. The medicine man brings me to the front. It’s uncomfortable. So many faces I don’t know stare at me.

“You have the cancer.” (Or I’m guessing that’s what he says.) He speaks softly to the gods, to his ancestors, in his language, looking into the sky. The feathers in his hair quiver, and he begins a long, quiet conversation. “A woman is in pain, in fear. What does she need?” It’s a longer conversation than I expect.

In front of us, the coals of the nightlong fire have died to embers.

He tells me that the ancestors communicate through the fire. They share and dance through the embers. There is life in there, spirits in them. The ember spirits are the go-betweens who can talk to us.

My spirits apparently say it’s time for the peyote.

I’m afraid, I tell the medicine man. It’s five in the morning, I’m really mentally messed up from cancer, and now I’m supposed to take peyote in front of my mom, aunt, and uncle before breakfast?

I’m really thinking: “What if it’s a bad trip? It’ll show up on my blood tests. It’ll mess up my mind. I have two kids to mother. Seriously, peyote doesn’t cure cancer.” I have way more fears than I realized. This itself makes me crack open a little more.

“Peyote is medicine,” he explains. “You take it, and the spirits can find you. Like a homing beacon. The peyote doesn’t cure you. But now your spirits, your ancestors, have a way in through you to heal you. To help you.”

I’m sold. Peyote is an energy anchor. I get that.

I hold a ball the of crushed peyote the size of a ping pong ball. Swallow, Summer.

My mom, aunt and uncle, all white-haired, lean in to watch, eyes like saucers.

Nothing happens. I don’t die on the spot. Everything looks the same.  I’m clenched and tight and waiting.

The medicine woman talks to me. She talks about my mind, my heart, but I’m not fully here. I’m caught in the web of peyote and dawn and hot coals smoking the air and all the hot sweaty shuffly bodies of these men and women I don’t know who surround me on mats.

Spirit don’t care who you are, what race or age, or what you’re healing from. Don’t care. It just heals if you ask it.

Judgment is petty and stupid when you have such a gift as healing to share.

The doctors have cut and burned the cancer out of me. My naturopathic healers have soothed and moved the illness from me. I’m a rich white girl who did all the right things. And I’m still thinking of the teepee and the medicine man and woman. What did they heal?

They healed my heart.

Any brutality scars you – scars your body, and scars your mind. Medicine fixes up your body, but who fixes up your heart? Pills won’t do it. Your emotion, your spirit? If those break, you are a goner. And I’ve seen those break this year, watching people I love give up and die. I lost Bill, grandfather to my kids, as he died from cancer a few months ago. This shit is real.

Peyote was never meant to cure my cancer. It was meant to ope